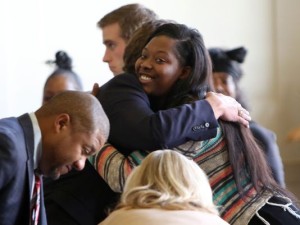 Samuel Dubose was the Cincinnatian who was shot and killed by a University of Cincinnati police officer after being stopped off campus for not having a front license plate (a “chicken shit” stop in the words of the county prosecutor).  He is survived by his mother, father, and 11 children from various mothers.  The only asset of his intestate estate is the potential wrongful death claim against the University of Cincinnati and its police officer.  A local personal injury attorney, known for his ads shown with him wearing boxing gloves, applied to be the administrator of his estate so he could represent the estate in the forthcoming wrongful death lawsuit.  After legal wrangling, the 18 year old daughter of the decedent, Raegan Brooks, was appointed as administrator of the estate today.

1.  Ohio law provides that if an individual dies without a will, his spouse or his children will be appointed the administrator of the estate.

2.   Nowhere in the Ohio statute is a personal injury attorney, no matter how pugilistic, listed as a possible administrator of an estate.

3.  I am somewhat surprised that that the decedent had a daughter named after a Republican president.  I am not surprised the name was misspelled.