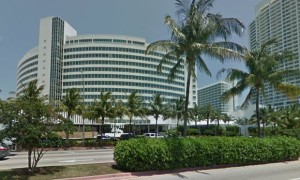 Ben Novack was the son of the builder of Miami’s Fountainebleu Hotel.  Both he and his 86 year old mother were murdered at the behest of his wife of 18 years, a former stripper, within 3 weeks of each other in 2009 to collect his $10 million estate.  His wife was convicted of his murder in 2012 and is now serving life in prison.  His wife was designated as the primary beneficiary of his 2006 will, but is prohibited from inheriting due to Florida’s Slayer Statute.  An appeals court recently held, though, that her daughter and grandsons may inherit his $4 million estate as his contingent will beneficiaries because the Slayer Statute does not apply to them.  Novack’s cousins and other distant relatives (including Steve Wynn’s wife, Andrea Wynn) are still claiming that his wife unduly influenced his will and that it should be thrown out.

1.  The undue influence argument should be a non-starter because after a marriage of 15 years, a husband will always leave his assets to his wife and then her children if they do not have their own children.

2.  Novack violated one of my tenets – never marry a stripper.   Another tenet is never marry someone you met in rehab.

3.  Attorney fees are the only thing that outpaces  appreciation of South Florida real estate if Novack’s estate declined in value by $6 million over 6 years.

4.  Andrea Wynn must have a punitive pre-nup with her hotel magnate husband, billionaire Steve Wynn, if she feels compelled to chase the few remaining millions of her murdered cousin.