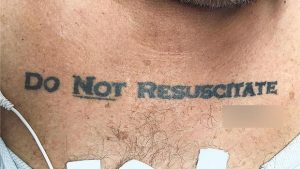 When an unconscious Florida man was brought to a hospital without identification but a tattoo that said “Do Not Resuscitate” and a signature, doctors were surprisingly faced with what to do with the dying man. They first thought they should disregard the tattoo because it might not reflect his current wishes because he might have gotten it when drunk. An ethicist later over-ruled the doctors and said that his tattooed wishes must be respected.The man eventually died. An NYU ethicist quoted in the article said that people should carry their health care directives with them to prevent these problems.
Several points:
1. Sad that the hospital was at first going to ignore something as obvious as the man’s tattooed wishes. Even if he were drunk when he obtained the tattoo, he could have remembered to remove it any time whenever he saw himself and the tattoo in a mirror.
2. I have scans of all my clients’ documents and have occasionally been asked to send them to a hospital while I have been out of town. The cloud can be a tremendous tool.
3. Carrying one’s health care directives in case of emergency seems like an extreme command by the ethicist especially in the case of homeless folks who are simply trying to push a cart with their blankets and clothes and looking for food. Neatly preserved health care directives would seem to be low on the priority list.
4. Moving beyond homeless folks, asking folks to carry their health care directives while they run to CVS or Sam’s Club seems burdensome. This is further proof that the academic world is not the real world.
cloud do not resuscitate estate planning ethics Florida health care directives health care power of attorney homeless living will tattoo