The competency of Tom Benson, the owner of the New Orleans Saints and Pelicans, has been challenged by his family in separate court filings in Texas and New Orleans.  The Texas judge has decreed that Benson needs assistance managing the assets in a Benson family trust.  He appointed two receivers to temporarily replace Benson as trustee.  They are not expected to make dramatic changes to his business holdings.  The New Orleans judge ordered Benson to undergo a psychiatric examination to determine his competency to make the proposed changes to his succession plan.

1.  This is merely the first round in a likely fifteen round bout.  When billions are at stake, the fight will be long and will not likely be resolved during Mr. Benson’s lifetime.

2.  I doubt that a competent and uninfluenced man would move $25 million out of his family owned bank to a competitor and tell his car dealership manager that he is the only person in San Antonio he trusts.

3.  It is a shame that the court appointed receivers do not have authority to hire a new coordinator for the Saints’s second worst in the league defense. 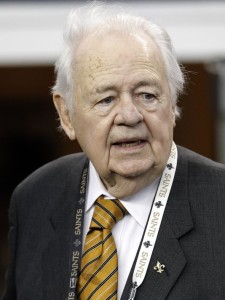