A NH woman was sentenced to up to 3 years in jail for digging up the body of her father last year.  He died in 2004.  The woman was miffed that she had been omitted from her father’s will and was convinced her that her family had buried her father’s real will with his body.  She did not find a will but reportedly found a bottle of vodka and a pack of cigarettes in his coffin.

1.  I offer to retain the original wills and trusts for my clients.  I never suspected that preventing grave robbing is a good reason for doing so.

2. The deceased was survived by his wife.  It would have been unlikely for a daughter to inherit anything upon his death while her mother survived.

3.  The father would have had good reason to disinherit a daughter who was obsessed with exhuming his body for 10 years while claiming she was doing it for him.

4.  For some reason, the woman never thought that a shredder would be a more effective way for a family to dispose of an unwanted will. 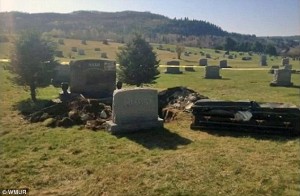