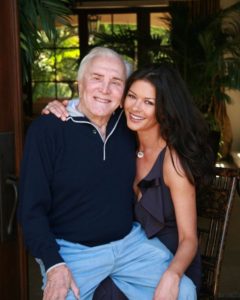 I am back after a two month hiatus fostered by writing for other projects, being slammed at work, re-locating our lives to Phoenix for five weeks, and suffering a dearth of worthwhile news in the celebrity estate planning area. Who knew that the death of a 103 year Hollywood icon would snap the streak?

Media outlets, led by the Daily Mirror from London, are reporting that the recently deceased Kirk Douglas left $50 million of his $61 million fortune to charity. Specifically, he left the money to the Douglas Foundation which he and his 100 year old widow, founded in 1964. All accounts seem flummoxed by where he left the remaining $11 million of his estate. The same reports want to scandalize the fact that he did not leave any money to his famous son, Michael Douglas. No links to his actual will have appeared on line yet.

1. California is a community property state which means that Douglas’ widow, Anne, likely has an estate also worth $61 million.

2. In 2020, an individual may leave $11.6 million free of estate taxes to children or other individuals. It is not a coincidence that $11 million is the amount of funds that the reporters cannot account for. Those funds will likely fund a trust for his wife and two sons.

3. It is extremely rare to leave funds to a child while a spouse is living.

4. Michael Douglas is reportedly worth $300 million which is more than he can spend in his remaining years. It does not make sense to leave any funds to an independently wealthy 75 year old cancer survivor who will pay estate taxes on 40% of the inherited assets at the time of his death.

5. Journalism is not hard, but it certainly is lazy when journalists are afraid to have reliable sources and to ask questions about concepts with which they are unfamiliar.