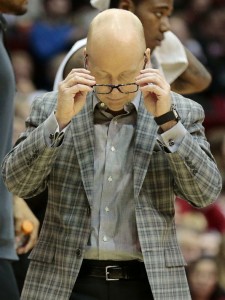 Paul Daugherty has once again graciously allowed me to guest write his The Morning Line blog for the Cincinnati Enquirer.   It is primarily about Mick Cronin.  I hope you enjoy it.

Love Means Never Having to Fight Over a Portrait

After Nick Saban declined the University of Texas  football job, the bad week for UT continued when a jury determined that a painting of Farrah Fawcett by Andy Warhol belonged to Ryan O’Neal and was not part of her art collection that she left to the university.  She left none of her estate to long time lover O’Neal which forced him to fight for the ownership of the painting which is estimated to be worth between $1 million and $12 million.

1.  Marriage can provide legal protection.  If Ryan and Farrah had married, he would have been entitled to one-third of her estate as a matter of law and could have skipped the drama over the painting.

2.  When one’s former girlfriend/lover/companion leaves $100K to a college boyfriend and nothing to you, perhaps your relationship is not comparable to the idyllic “Love Story.”  Love means never having to fight over a portrait of the deceased.

3.  A photograph with painted eyes and lipstick is worth seven figures?

Ryan O’Neal and the University of Texas are engaged in a lawsuit over a painting of Farrah Fawcett created by Andy Warhol which could be worth $30 million.  Farrah’s will left her entire art collection, including another portrait of her by Warhol, to the University of  Texas.  Mr. O’Neal claims that the painting was given to him by Warhol and that he had taken it to Farrah’s house in 1998 after they broke up because his then girlfriend did not like it in the bedroom.

1.   It is generally in poor taste to hang a portrait of an ex in the bedroom while involved with someone else.  Kudos to Mr. O’Neal for removing it.

2.  When taking a piece of art to an ex, one might want to reclaim it in the 11 intervening years instead of waiting until the ex dies.

3.   Apparently the University of Texas is not satisfied with a $7.2 billion endowment and is willing to fight for more.