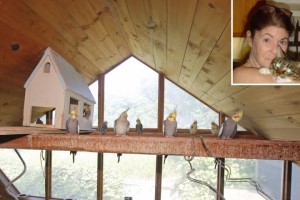 A Manhattan millionaire left $100K to a pet trust for her 32 cockatiels.  She requested that the birds continue to live in the aviary in her $4 million East Hampton property; that they be fed Avi-Cakes (which cost $115 for a 20 lb bag), carrots, water, and popcorn; and that the building be cleaned each Monday and Thursday.  She was far less meticulous with the rest of $5.3 million estate which she initially left to her step-son in a 2006 will.  She later tried to revise that will by crossing out his name and writing in the name of her sister who is now claiming the remaining $5.2 million.

Several points, some of them previously made:

1.  Certainly this woman missed the forest for the trees – she focused on a picayune aspect of her estate while ignoring the proper disposition of the bulk of her estate.

2.  Handwritten changes on a validly executed will are ineffective and will likely lead to her step-son inheriting the $5.2 million (at least under Ohio law)

3.  As mentioned previously, I retain the original documents for my clients to preempt this type of attempted change/spoliation of wills.

4.  This type of myopic focus on pets while ignoring one’s relatives is more commonly seen in cat owners rather than bird owners.