Not About the Sport Coats 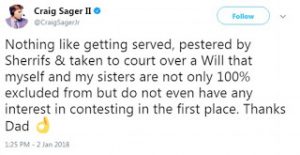 Craig Sager was a beloved basketball reporter who died last year from cancer. He was known for his colorful sport coats and bantering with Gregg Popovich, coach of the Spurs. He was divorced and re-married at the time of his death with children from both wives. His will is being probated in Georgia. It reportedly left everything to his second wife, Stacy.

His son from his first marriage tweeted yesterday that he was being summoned to court by a sheriff to prevent him from contesting the will even though he was not interested in contesting in the first place. His sister, Kacy, defended her brother while also flaming her step-mother and tweeted a list of grievances. Seeing a moment in the sun, the former girlfriend of the son felt compelled to jump into the fray and call the step-mother a POS in typical coarse social media parlance.

1. Georgia is similar to Ohio in that when a will is admitted to probate all of the heirs at law (spouse and children) plus all of the will beneficiaries are required to receive notice of the probate proceedings via certified mail.

2. The son from the first marriage and his sisters were simply receiving the legally required notice.

3. Given the lapse between the date of death of Sager’s death and the date of this process, it is likely that most of his assets were in a trust and that a small account was titled only in his name and hence subject to the probate process.

4. Sager might have excluded his children from his first marriage due to their hostility to his second wife and/or their over-reaction to legal events.

5. Hostility to second wives can be avoided if they are age appropriate and their names do not rhyme with that of one’s daughters.

The Will In the Cupboard Melissa Mathison, who died last month at the age of 65, was renowned for being the screenwriter of E.T. and The Black Stallion.  She had also been married to Harrison Ford from 1983  until 2004.  She left an estate worth $22 million, most of which is in trust.  However, her original will cannot be located.