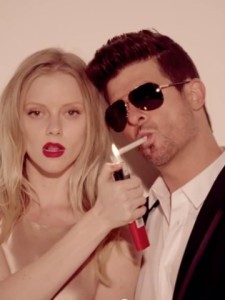 Let’s Get It On

In a slow news period while waiting for info on Joan Rivers’ will, let’s keep it in the estate arena but mix it with pop music. The estate of Marvin Gaye is battling Robin Thicke and Pharrell Williams over whether “Blurred Lines” plagiarized Gaye’s song “Got To Give It Up.”  The case is premised on comments Thicke made that “Got To Give It Up” was one of his all time favorite songs and that he wanted to make a song like it.   After taking credit for “Blurred Lines” in interviews, in his deposition under oath Thicke later pleaded drug and alcohol abuse during the creation of “Blurred Lines” and deferred credit to Pharrell Williams as the primary songwriter.  He and Williams later sued Gaye’s estate in a declaratory judgment action that they did not plagiarize the Gaye song.

1.   Thicke and Williams should not have sued Gaye’s estate.  They precipitated an unnecessary battle – if the estate thought the songs were identical, it could have sued them.

2.  I doubt Williams is feeling “Happy” after Thicke threw him under the bus after Williams gave Thicke the only reason people know him besides being the son of Alan Thicke.

3.  “Got To Give It Up” does not rank in my top 20 Gaye songs.  Thicke must have been drugged and drunk to say it is one of his all time favorites.