In the non-story of the year, Patrick Swayze died in 2009 at which time he owned real estate in New Mexico.  His widow, Lisa Niemi, recently filed a will to transfer the real estate to their joint trust.  Swayze’s family members believe that the will was possibly forged because they did not receive any of his $40 million estate.  They contend that the signature does not look like his and that he was admitted to the hospital that day before dying two months later.

1.  It is rare for someone to include parents and siblings in a will when one has a spouse (and children).  It is also possible that the trust provided for his family members.

2.  It would not be far fetched for his handwriting to become unrecognizable after  suffering from pancreatic cancer for 18 months.

3.  Who knew “Ghost” could be real?  In a turn of events, even without the help of Oda Mae Brown (Whoopi Goldberg), Swayze’s family is channeling the greed of Sam Wheat’s  frenemy, Carl Bruner. 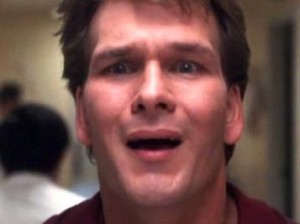